Playing Under The Lights at #NationalsVI

The greatest week in pickleball has wrapped up and everyone left raving about the experience.

One huge vendor tent combined with 28 courts and almost 700 players, plus dozens of Sun City Festival Pickleball Club and USAPA volunteers created the most spectacular tournament in pickleball history.

After watching players aged eight to eighty play over 2000 matches during the seven days, we have come to one conclusion.

It is great to play any time when you are at the National tournament, but if there is one goal that every pickleball player young or old should have, it’s to play under the lights.  It is just special to see and feel the atmosphere at those matches that are played at the end of the day.

If you are playing under the lights, it means pretty much everyone has lost except you.   The crowd is totally focused on you, the music is blaring during the timeouts and the TV cameras are rolling.  It means you have survived a long,  hard day and a medal is likely coming your way. 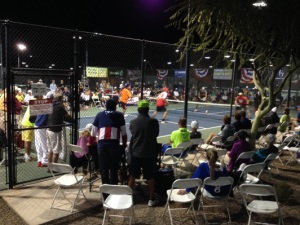 The matches under the lights are special.  Think about the tennis US Open in New York at night.  Yeah, it’s just like that, only better because you get to play in it.

So make it your goal to play under the lights.

It will be tough to do, but certainly worth the effort.

Good luck in next years National tournament in Casa Grande.